The world is eminently sensible as it is. That is the basic tenet of Earth Literacy. The Earth – our planetary world – and all the communities of life that inhabit it, make wonderfully good sense. Well, almost all. We humans may be the exception. It is too early to tell. We are a very young species, and we’re stuck in our adolescent stage.

Earth Literacy is the ability to ‘read’ the Earth – the symbols and signs of the natural world. Literacy itself must be redefined. A new definition of literacy should include a measure of a people’s ‘level of consciousness.’ It should measure their ability to work constructively for the well-being of the earth and society, as well as for themselves. Our level of consciousness will ultimately transform all human relations and societal problems.

A two-year international research study reported that most educational institutions in the industrialized world teach an old manner of thinking. The study,sponsored by the Club of Rome, is published in the book No Limits to Learning: Bridges the Human Gap, (Pergamon Press). A team of three educators concluded that the most serious ‘literacy crisis’ is focused in prestigious universities of developed nations. That crisis threatens the human species with ultimate catastrophe at the very moment when unprecedented human fulfillment is possible. Educational institutions give us immense power: power to change the genetic coding of life, power to alter the life-support systems of our Earth; but education does not show us the consequences of our use of our power. We are given parts to a tantalizing puzzle, but no way to put the puzzle together.

What judgment can we make when students are trained to unthinkingly take jobs that directly, or indirectly, undermine Earth’s ability to support life? The issue is more than simply the adequacy of education. It is an issue of morality. Humankind’s crisis of survival is not only scientific and technological, as most of us are taught. Our crisis today is spiritual and ethical. Earth Literacy is an effort to cultivate an understanding of the incredible opportunity (as well as danger) that the literacy crisis creates for both students and educators.

For humans to solve the twin problems of preserving a livable environment and of restructuring self-destructive political and economic global relationships will require a radical shift in perception. The crisis represents a choice for the human species between the possibility of ultimate catastrophe or moving into a time of unparalleled fulfillment. To live at the time of such a once-in-a-lifetime-of-a-species choice is an incredible gift and an opportunity. To be unaware of such a gift and opportunity, to sleep through the “turning point” in life’s story, would be, for an individual, a colossal human tragedy.

As a curriculum, Earth Literacy is more concerned with process and story than content and categories. It is interdisciplinary and experiential. If Earth Literacy were a tree, it could be said to draw its theoretical sustenance from four major root systems.

Get News and Notifications of Upcoming Events Straight to Your Inbox 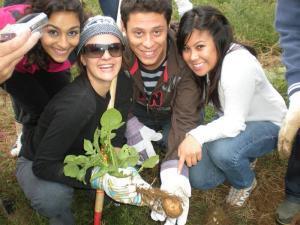